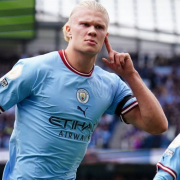 Last weekend we witnessed a spectacular 9-goal Manchester derby. Of course at the centre of it all was Erling Haaland: a hat-trick and 2 assists. As reported by the BBC Sport former Chelsea striker Chris Sutton simply said “he is a freak”. Even his own coach Pep Guardiola is impressed by the player. And let`s face it, it is probably very hard to impress Pep.

And the stats confirm it. Breaking record after record and surpassing Premier League legends after less than a dozen matches for Manchester City.

The BBC Sport team shared a few records which will easily be broken by the Norway forward if he keeps it up:

All signs suggest that all of these records are within his reach and all fans are in for a spectacular season.